Or, how I became cardless and confounded

It was a busy Saturday afternoon in Belfast. Next week I would travel to a nation under a different coin. I was out in search of currency that would be accepted when across that border. I recalled that in Belfast's Castle Court shopping centre there is a currency exchange booth; it would be worth enquiring there.

Before I made for the booth, I stopped at the ATMs near the escalators. I needed to know how much of the King's sterling I carried. Into the ATM I inserted my card, and instead of accepting my card the machine squeaked and rustled. The card was dragged inwards then spat out slightly. I pulled then retrieved the card, thinking it was just some dirt inside the machine. The machine suggested I try again, which I obliged. This time it gobbled the card fully and switched to a blinking "Out Of Order" message.

My heart sank. I gave the machine a suggestive slap but I knew it was in vain.

First I stopped a man who looked like a the facility's security guard but was actually security from elsewhere and on his lunch. He understandably didn't want to spend his precious lunch hour helping a stranger.

Thus I roamed the mall reluctantly. I felt the same primal impulse as if I'd left a hunted kill because the machine might spit out my card and someone would have access to all my money. 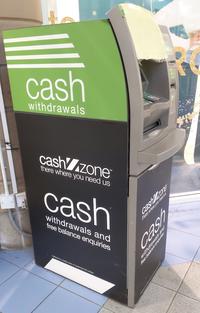 I thought that surely the centre's management would be willing to help. I presumed they'd have an office at the back, operate a help desk or just be anywhere accessible. I passed nothing that suggested officialdom as I walked to the far side of the concourse.

There was a salesman in a booth, his usual job was to persuade you and I to sign up for package television deals. He should also know where to find the leader? When asked he insisted that he did not know, he doesn't come here often and I should instead ask inside a shop.

The lady in the pharmacy sympathised with my plight and suggested I instead seek the centre's security for advice. She assured me that genuine security existed in the centre and he isn't on his lunch break. I briefly considered committing some antisocial behaviour to get his attention, as the image of a stranger retrieving my card persisted in my head.

The big man of the banister

The Castle Court shopping centre has at least three floors, each with a walkway that faces over a central open concourse. I figured that the security guard would be standing up here, surveying all in the hall below. Indeed, this was where I found him.

He informed me that only the Cashzone company could open the machine and they'd send the card back to the bank at the end of day. This was what I expected but was still a little dismayed. I was stranded without easy access to my funds.

Furthermore, I wouldn't sleep knowing that a stranger might open the machine and access my card. So I phoned my bank and asked them to block the card. They said I'd have a new card at the end of the week, by which time I'd be on my holiday. Not good news for acquiring money before I travel, or spending money during travel.

There was normally a processing fee for the issuance of a new card but they waived it. I said Cashzone should pay it because they are responsible for these machines and therefore they wasted all our time. Would it hurt to clean your own machine every now and then?

The only funds I had left was a £5 note in my wallet; I needed a pint after that ordeal.

On my way to the pub I passed a concerned citizen bearing a placard that read "no to digital cash" or similar, and I said he was right because I couldn't access my money, and I urged the use of gold.