During my school years, I had a strong wish to access the Internet at my leisure. Regrettably my school's ISP (C2k) did not share this belief in open access to information. Many websites were caught in the filters long before they reached our heavily outdated Celeron boxes. The list of forbidden websites seemed to grow daily. Each time someone found a new games website, or "funny pictures" website, it was blocked within weeks. The theory was passed around that by 2012 the only website that C2k wouldn't block would be their own.

Something had to be done.

At this time I had access to web hosting with a typical offering of PHP/MySQL (2007's finest). I found a PHP Proxy script; it was imaginatively named PHProxy. I soon uploaded and configured the script and gave it a test - success! I was presented with a text input box, a "GO" button and a framed window. Therein I could type in any URL, then this frugal PHP script would fetch the requested web site and its contents were displayed in the frame below. This meant that if one could access my website, then one could use it to access any website. My web host was used as an intermediary. 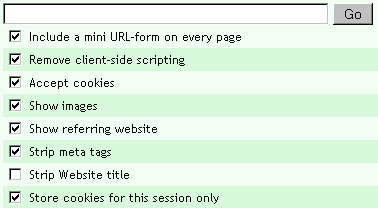 The following day, I went to the ICT Suite at lunch time and demonstrated this Internet liberation. Any website was available - I was able to access the vaunted Bebo and view anyone's page, something never before seen within these walls. For my efforts I was lauded for "hacking the system" by the small crowd who were present. (Then came the inevitable requests for my "hacking skills" to be utilised in many ways, some less illegal than others.)

The following week I returned to the ICT Suite and logged on to make use of my proxy script. Much to my dismay, instead of the text input box and the "Go" button I was instead presented an "Access Denied" page of the very type my proxy should bypass. It gave the reason:

This was printed on the page along with my website URL. The glaring words rang true: I had been caught.

Thus ended my Internet freedom (at least for those 6.5 hours of the day). I then tried accessing the root page of my website and found the same block screen presented; they had blacklisted my entire domain! No more accessing my small collection of flash videos either. I could make my case to the systems admin, but why bother? As I knew even then, network engineers are not partial to mercy.

Thus the tale almost ends. Until that same evening when I received an email from my web host administrator. He informed me with firm politeness that a proxy server had been detected operating on my web space and that I should remove it immediately. This was because it violated my web hosting terms of service, which I as a schoolgoing youngster had definitely read carefully.

Not wishing to suffer any more online setbacks that week, I complied. The script was removed and a prostrate apology sent to the administrator. Thus ended the proxy server and all evidence of its brief existence.

Years later, I wonder if there was collaboration. The timing of these two events was too near just to be coincidence. The warning didn't arrive during the first week of the proxy's operation when it must have been flagged in the web admin's system. So why did the web host admin hold off contacting me until the same day that I am blocked by the school network? This was clearly a campaign of targeted humiliation against me and both organisations were involved.

Moreover, a friend from these days become a teacher. During 2019 I asked him to attempt a visit to my old web domain using a school computer. The schools in this country still use the same ISP, and lo, my website is still fully blacklisted. This is at least 14 confirmed years my humble web presence has been scorned by their database. Never provoke the ire of C2k; all transgressions are eternal. 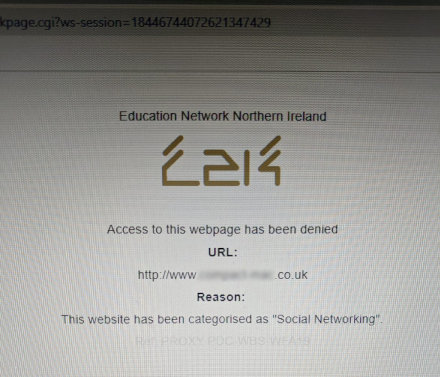 C2k, still bearing grudges into 2019. My former URL is redacted.

Curiously my old website has been reclassified from "proxy avoidance" to "social media". This is news to me; very few people ever frequented it, annulling any definition of "social".