A parody of an unnamed cultic group, this is the founding myth of a potato religion from 2016. Here is a study of the tenets and history of the sects.

The Central Tenets and Sects herein described, with the principal differences of belief and practice chiefly examined for each.

IN HOC SPUD VINCES
By this spud conquer

THE FIRST DAYS OF POTATO REVELATION.

The Potatonic faith was founded in the fourteenth year of King Edward the Baked. The Great and Final Prophet of All Spuds, Maris Piper [roasts be upon him] was in his field digging for his spuds. While he was digging, his swings of the spade were in perfect harmony with the rhythm of nature, and lo, there appeared unto him, a mighty spud in his spade.

Maris Piper [roasts be upon him] was stunned and heard a deep booming voice proclaim: ‘Thou, O Selected Amongst Farm labourers, hast been selected to bring the great word for all cropkind, and mankind also. Never more shalt thou be simply known as Maris Piper, but henceforth also as the Great Digger.’

Thus began a series of revelation which the Great Digger [roasts be upon him] recorded with mud found on real potatoes written onto potato sacks. At first, the revelation was dry and rather mundane, consisting of sack weight and nutritional information, but later it took on more forms, such as peeling instructions and ideal roasting times.

The sacks were picked up by some local greengrocers who were persuaded that these potatoes were the finest they had found to sell. This immediate rise in success caused the Great Digger [roasts be upon him] to realise that his work was truly blessed and he was doing the Spade Spud’s work.

The greengrocers of the Alloted Fields and Furrows did consent unto his spuds and many commoners throughout those realms did gladly receive them. The Great Digger Maris Piper [rbuh] looked upon the commoners and saw that they were lowly, lacking guidance with their dinners. He did pity them and wrote a Confession of Tatiefadge unto the sacks. This confession was written after much consultation with the Glorious Spade Spud in the sacred potato bagging room and it was written onto every new sack. 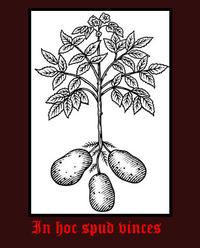 This was carried on for some years as the sacks were distributed to more and more greengrocers. More and more people began reading the sacks written in sacred mud and began to find their dinners improving and their wellbeing with it. When someone became so persuaded of The Great Digger Maris Piper [rbuh] and his glorious potatoes they bought his spuds and his only, renouncing all others. This event would be known as a Spuddening.

THE DEATH OF THE GREAT DIGGER [RBUH].

After many spuddenings, Our Prudent Master of Dinnertime, the Great Digger and bringer of the Ancient Tatiefadge Confession, Maris Piper, may many fluffy roasts made only of the finest oil ever be upon him, tragically passed away in the thirtieth year of King Edward II the Mashed. His funeral filled the local greengrocer’s and the local champ served a fine memorial meal in his honour.

The meal was to be the grandest in all Potatodom, as it was made from some of the first potatoes that the Great Digger [rbuh] had gathered from his fields. Tragically, as these had been sitting in a sack for forty eight years they were all rancid and all present that had eaten them did die. Though they all foresaw their certain deaths, no one at that meal wished to either seem weak in his faith or shame the memory of the Great Digger.

After 200 years had passed, the people of potatodom in all the alloted kingdoms were disparate and seeking clarity on a number of questions. In what direction should the potatoes be roasted in the oven? Are they best enjoyed boiled, baked or fried? Amongst these vociferous controversies, there did arise in the mountain fort of Ubap, a mighty Potatoite known as Nigel. This potatoite proclaimed himself the First Fadge Lord. His claims included that outside of him no sure roasting was to be found and all Potatoites must recognise his authority or lose all their potatoes. He based his claim to authority on a story that the Great Digger [rbuh] had visited the town of Ubap once to establish a greengrocer and left sacks of potatoes there.

This lead to an uproar among the Potatoites. Many believed that adequate answers to their queries could be found written on the sacks and within the Confession of Tatiefadge. The First Fadge Lord was claiming that he alone could interpret the sacks and he would shortly receive words of clarity and comfort from the Spade Spud. Other potatoites believed him and so this caused a split when the differences could not be reconciled at the Council of Sheugh. The two factions left the chippy with the tensions very high.

Until this very day, the schism has never been healed. There were many appeals for reconciliation among all of Potatodom, but never were they heeded. No points were conceded no matter how strong they pleaded. Over time, the disparate followers of the Great Digger [rbuh] fractioned into the following groups:

THE CHIEF SECTS of Potatestantism.

If that wasn't enough, see all in Tales (1 total). Back to writ top.